Case Study: Having Floss has made such a difference during the pandemic 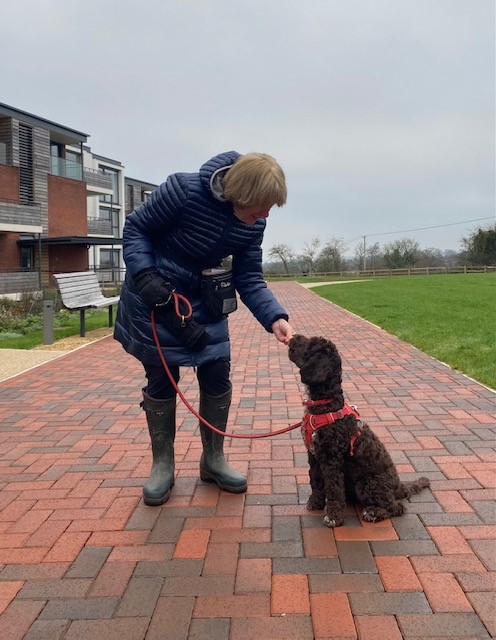 Jan moved from London to Wadswick Green in March 2020, three days before the first Covid-19 lockdown. She adopted Floss, a 16-week-old cockerpoo, and is now thoroughly enjoying spending her retirement in Wiltshire with her four-legged friend.

“My daughter and her partner knew a lady whose cockerpoo just had a litter in the area. She was looking for people to adopt them, but my daughter already had a dog, so she asked if I was interested instead. Although I had never had one, I’d always wished for a dog over the years, so I thought: now that I’m settled in at Wadswick Green, it’s the perfect time!”

“Because it was during the lockdown, I was shown the puppies over Zoom. I knew I wanted a female, and when I saw Floss with the little white patch on her face, I knew she was the one. She moved in with me eight weeks later, once she was old enough.

“At first, I felt a bit overwhelmed at the sudden amount of responsibility, but it worked out really well from the start. I have experience with dogs because I’d already looked after many including my daughter’s. Puppies can miss their mother at first and they can be a little bit more difficult, so my daughter housed Floss for the first few days. Very quickly however I insisted to have her as I was too excited!

“I’m absolutely delighted to have her: she settled in so nicely, she’s very well behaved. I have a comfortable cage for her to sleep in, and I keep the door open so she can come in and out as she wishes. Every day, she gets inside and settles in for the night at 9 pm.

“We go on walks twice a day. I would say that’s the biggest advantage for people my age: it keeps you fit, because it’s no longer just about you. I’ve always been fairly active, I’ve played tennis, golf, and other sports, but having Floss gives me that extra incentive. Just this morning we walked for two hours across the countryside!

“In London I would sometimes take my daughter’s dog to local parks, but I always felt concrete was awkward for their paws and there were too many cars. At Wadswick Green the countryside is wonderful, we have so many routes and paths to explore, it’s just perfect for dogs. There are fewer cars as well, so it feels much safer.

“Having Floss has made such a difference during the pandemic. My daughter and her partner are both key workers, so even though I managed to see them a few times it was always brief and from a safe distance. But ever since I got Floss not a day goes by that I haven’t spoken to anyone.

“Virtually everyone stops to have a chat when we’re out and about. Before people would always be polite, but most of the time it would just be a “good morning” before they walked off. Now I speak to everyone, not just at Wadswick Green, but also in Corsham and wherever we go.

“It’s very therapeutic to have someone else to think about as well, especially at this time when we have to self-isolate. You have to get up to make sure she has something to eat, that she gets her walks, to schedule vet appointments in time, to ensure her needs are taken care of... it’s a lot of work, but it makes such a difference in your life.

“My daughter recommended a dog carer, so I arranged for her to come look after Floss one day a week. I use that day to run errands, go on day trips to London to see friends, go to the theatre, shopping, etc. In fact, just this morning I had my Covid vaccine!

“I’m so grateful that I was allowed to have Floss. A lot of retirement villages only allow you to have a pet if you move in with one, but don’t let you get one once you’ve moved in. At Wadswick Green it caused no issue at all, and the staff have been very understanding and supportive.

“Having Floss reminds me of bringing up my three children: it’s a lot of work but it’s so worth it! I would recommend it to anybody. I don’t miss London nearly as much as I thought I might - it’s completely different here, and I am absolutely delighted.” Celebrations were in full swing at Rangeford Villages for the Queens Platinum Jubilee weekend with residents hanging out the bunting and dusting off their dancing shoes to enjoy a whole host of celebrations. Award-winning later living specialist Rangeford Villages hosted a ground-breaking event on 18 May, in the presence of local Councillor Theresa Burton, to mark the launch of a brand-new lifestyle focused community for the over 60s, Homewood Grove, near desirable Chertsey in Surrey. Complete Peace of Mind with your Household Bills for Two Years

For most people, the thought of not having to worry about Household Bills for two years is only a dream...