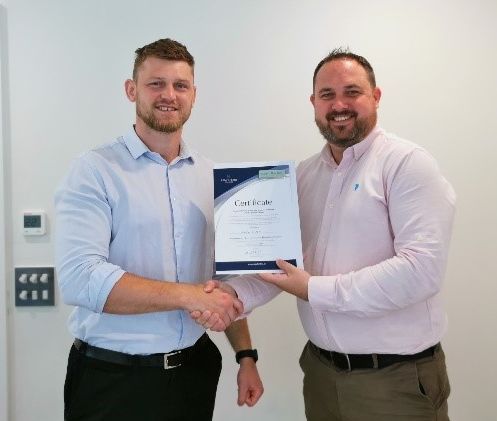 (Olly Bilton (left) is presented with his Award by Will Ryan)

An employee has been recognised with a long-standing service award after 5 years of outstanding service at the award-winning operator and developer of later living accommodation, Rangeford Villages.

Oliver Bilton first joined Rangeford Villages integrated retirement community at Wadswick Green in 2015 as a Concierge, where he was responsible for supporting residents with their on-site needs.

After taking a break to travel, he returned to the company in 2017 where he was promoted to Lead Concierge. Oliver was then promoted to the role of Project Officer after demonstrating a strong work ethic and excellent project management skills, where he was responsible for residents and contractor liaison and for facilitating a major village improvement project. Having successfully delivered the project and demonstrated a desire for further progression, in 2019, Oliver moved permanently to the Rangeford Villages Development Team and to the role of Assistant Development Manager.

Oliver is currently working at Rangeford Villages’ retirement development Siddington Park on the outskirts of the picturesque town of Cirencester in the Cotswolds, where the company is further supporting his career progression by investing in his Building Surveying Degree through the RICs Chartered Apprenticeship Pathway.

Oliver is also playing an integral role in the development of Rangeford’s latest brand-new lifestyle focused community for the over 60s, Homewood Grove, near desirable Chertsey in Surrey.

Will Ryan, Village Manager at Siddington Park, who presented Oliver with his award, commented: “We are delighted to present Oliver with his award for long standing service with the company, as well as a bonus of £150 and an extra day of annual leave entitlement. Oliver’s progression through the ranks over the years, is a testament to his hard work and commitment to the company. This recognition, is another of example of Rangeford’s commitment to investing in its people and to ensuring its brand value of excellence is delivered, as it continues to strengthen its already well-established management team, and to expand its impressive retirement community portfolio.”

Rangeford Villages recent expansion has resulted in the creation of three integrated retirement communities across the UK: Wadswick Green in Wiltshire, Mickle Hill in North Yorkshire and Siddington Park in the Cotswolds due to open later in 2022. Plus, the construction commencement of Homewood Grove in Surrey, as well as the recent successful acquisition of a much sought-after site in Stapleford, Cambridgeshire. For many retirees, the thought of moving home can be an unsettling process, particularly when factoring all the additional and often hidden costs, this coupled with the ever-increasing cost of living, can be a deterrent for many. Rangeford Villages, the award-winning later living specialist, has further strengthened its Senior Leadership Team with the appointment of Amanda Valentine-Bunce as Head of Marketing and Ryan Fairbairn as Managing Director for Rangeford Developments. Siddington Park, the modern lifestyle village for the over 60s, on the outskirts of Cirencester, by award winning integrated retirement community specialist Rangeford Villages, was proud to host a VIP visit from local dignitary, Sir Geoffrey Clifton Brown MP on Tuesday 2nd August.